Most people use the terms “optical illusion” and “visual illusion” interchangeably, much like “fluid” and “liquid” or “sofa” and “couch” are synonyms.

At first glance, this might be seemingly pedantic in the extreme – par for the course for a society that is increasingly engaged in playing language games.

However, this is not just semantics – these terms refer to quite different processes that reflect profound metaphysical differences. Admittedly, conflating different phenomena is surprisingly common in psychology.

“Optics” pertains to the properties of light. Light – a form of electromagnetic radiation – interacts with matter, as it is transmitted through various media, which can give rise to a variety of optical phenomena.

For instance, as light passes from air into a denser medium such as water, it is refracted, which means that it changes direction. This is entirely a physical phenomenon, but as organisms use light information to image the environment, it can give rise to optical illusions: The pencil in the image below is not actually bent – it is perfectly straight, but immersing it in water (which is an optically denser medium than air) gives the appearance of a kink. 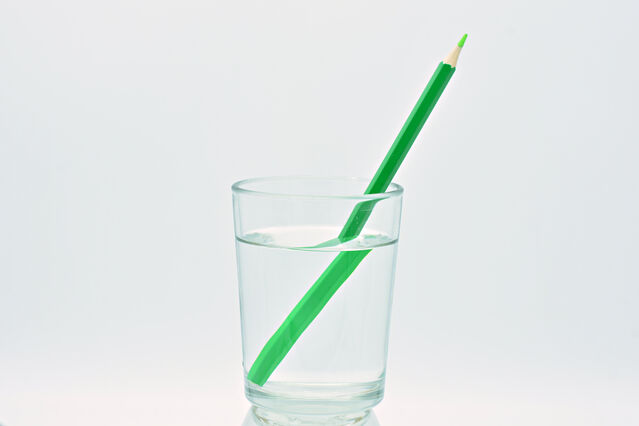 Is the pencil crooked?

Therein lies the illusion – the appearance of the crooked pencil is not corresponding to reality, but the light rays do get bent by the water. It is light (or optics) that is the cause of the illusion.

In contrast, visual illusions are caused by the processing in the visual system of the organism itself. The root cause is physiological, not physical.

A case in point is a visual illusion that was recently introduced by Michael Karlovich and myself: the “Scintillating Starburst.” 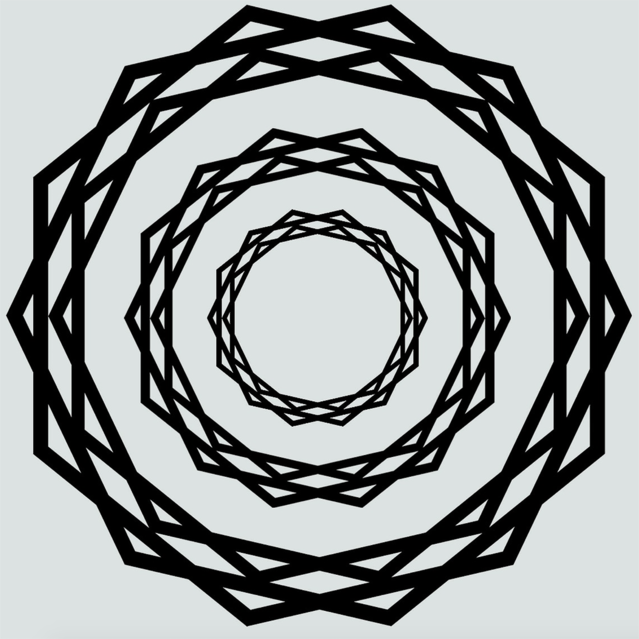 Do you see rays coming from the center?

Looking at this image, you can see fleeting bright rays emanate from its center. However, those rays are not actually there. There is no light information in the image that causes this illusion – the illusory rays are not objectively brighter than the gray background surrounding them. Instead, this illusion is caused by the brain, specifically the visual system that gives rise to perception, hence “visual illusion.”

Vision is a cognitive act by which an organism tries to gain information about its environment in order to improve action. As such, it is imperative that this happens fast. This is challenge, as the information available might be insufficient to parse a complex situation in the environment accurately. That is when the visual system fills in the missing information with educated guesses. Here, the educated guess is based on the fact that the intersection points of the black shapes that make up the figure above appear slightly brighter to a part of the visual system than the rest of the shapes. This is also not true objectively, but the visual system does not know that and quickly “connects the dots” with the most plausible interpretation, which is that there are bright lines occluding the black shapes. This effect is even more salient in a rotating version of the image.

Thus, perception works much like auto-correct. Auto-correct is not always all that correct, but it is making an educated guess as to what you might have wanted to say with the information it has at the time, in order to keep the conversation going.

This illustrates the point of visual illusions – they reveal the constructive nature of visual perception, and from the specific guesses it makes, we can infer how it works when these guesses differ from objective reality. Here, the scintillating starburst effect allows scientists to investigate long-range spatial integration by the visual system. Previous, seemingly similar illusions were based on grids, which do not lend themselves to this kind of exploration, but make the brightness illusion at the intersection points of the grid more salient.

If perception does not correspond to reality, we are dealing with an illusion. However, this discrepancy arises from how light interacts with matter in the case of an optical illusion. A visual illusion is due to the processing that happens in the brain itself. The fact that the brain adds a little bit extra and is not just a passive receiver of optical information has profound metaphysical – as well as practical – implications. Your perceptions are the end product of many cognitive processing steps. They might or might not correspond to objective reality, so one might not necessarily want to take them at face value. Visual illusions are not just “tricks of the light.” That is why these terms are not interchangeable.

Action potential: Have you encountered egregious misperceptions or autocorrect fails? If so, ponder why they might have occurred, given the phenomena and mechanisms discussed above.